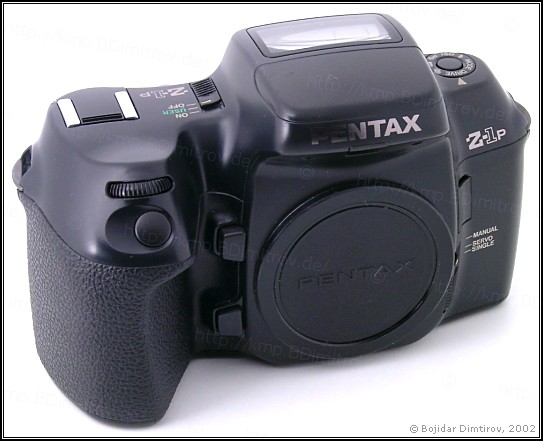 From the time of its release (1995) until the release of the MZ-S (2001), the body was Pentax’s AF flagship. The camera is large and heavy, but also solid and well-built. Most functions are selectable through two wheels positioned under the thumb and index finger as well as a function selector on the upper-left side. The camera’s features are targeted towards professional users: separate flash and ambient exposure controls, custom functions, exposure control in 1/2 or 1/3 EV steps, fast shutter and flash synchronization, DOF preview, 2-second mirror-prefire, multiple exposure, interchangeable screens, spot metering, custom user mode, etc. Very useful is also the ability to “shift” exposure along the program curve and to instantly jump to the camera’s internal preference (even under changing light conditions).

The camera has a few weak points too: dust gets to its insides quite quickly, it consumes a lot of power, there is no AA battery pack available for it, and the TTL flash system lacks evaluative and multi-segment TTL flash metering. A few mechanisms seem fragile: the mechanics of the built-in flash, the battery compartment cover, and the base plate. The viewfinder is well laid out, but offers only 92% coverage. But the biggest problem with this camera is Pentax’s lack of commitment and further development. In the years between 1995 and 2001, the competing manufacturers upgraded their models a number of times while Pentax left this body with a small number of fitting accessories and an AF system whose performance was quickly outdated by the competitors

Many of the disadvantages of this camera have been addressed by the “new” flagship, the MZ-S.

The Pentax FDP Grip Strap is a hollow plastic device that looks like a battery pack, but its only function is to improve the handling of the Z-1/PZ-1 and Z-1p/PZ-1p cameras.