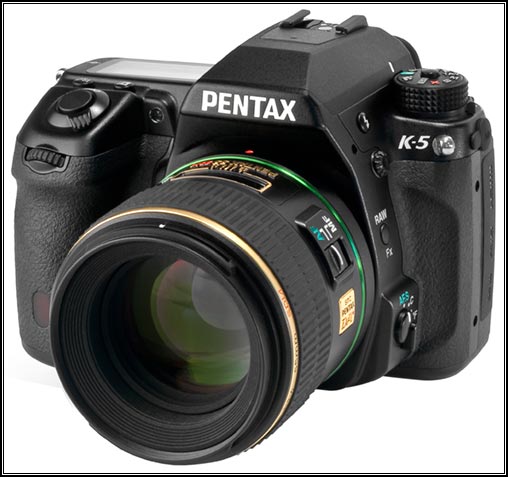 Being the successor of the K-7, the K-5’s design remained almost unchanged. Internally, however, there were several changes. Notably, the K-5 features a new 16 MP image sensor with much improved low-light capabilities. The K-5 was the first Pentax DSLR to be able to record Full HD (1920 x 1080 pixels) videos.

In 2011 PENTAX announced that the K-5 SLR was available in limited quantities in “Limited Edition Silver”. The camera�s mode dial, control buttons and levers all feature the silver color. It has an redesigned grip that is thicker than with the standard K-5 model. Shock-resistant, scratchproof glass is used to protect the LCD monitor on the camera�s back panel and the status panel on the top. Along with the silver K-5, three silver Limited lens models were announced: smc PENTAX-DA 21mm F3.2 AL Limited Silver, smc PENTAX-DA 40mm F2.8 Limited Silver, and smc PENTAX-DA 70mm F2.4 Limited Silver. From each 500 were made.

In 2012, another silver-black version of the K5 was announced: The K5 Silver Special Edition was available only as a limited edition of 1,500 sets worldwide. The package consisted of the PENTAX K-5 Silver digital SLR camera body matched with the ultra thin, silver smc PENTAX-DA 40mm F2.8 XS lens.