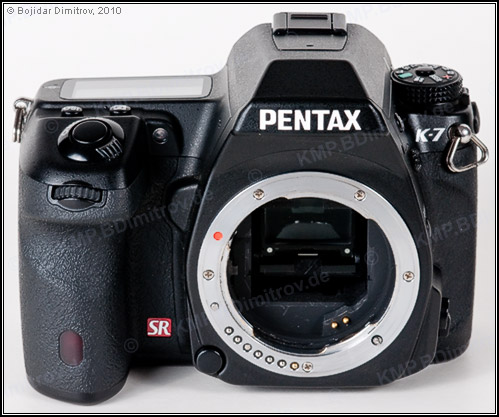 Being the successor of the K20D, the K-7 incorporates a similar 14 MP image sensor. Almost everything else, however, is changed. The camera body is smaller and more traditionally designed than the K20D’s. The casing is made of a magnesium alloy instead of plastic. The viewfinder offers 100% field of view instead of 95%. Multi-segment metering is depends on 77 segments instead of 16. The camera is capable to shoot 5.2 frames per second instead of 2.8. The dust-removal mechanism uses supersonic vibrations to eliminate dust spots. Plus, the K-7 was the first Pentax K-mount camera to be able to take videos (at HD resolution – 1280*720 pixels (16:9) – or at 1536*1024 pixels(3:2)).

In February 2010, the launch of the PENTAX K-7 Limited Silver edition was announced. It was marketed in a quantity of 1,000 sets, only. The SR (Shake Reduction) lettering is in a special gold color. The K-7 Limited Silver is equipped with a “golden section ratio” focusing screen. The LCD monitor on the camera’s back panel is protected with a reinforced, shock- and scratch-resistant glass plate.