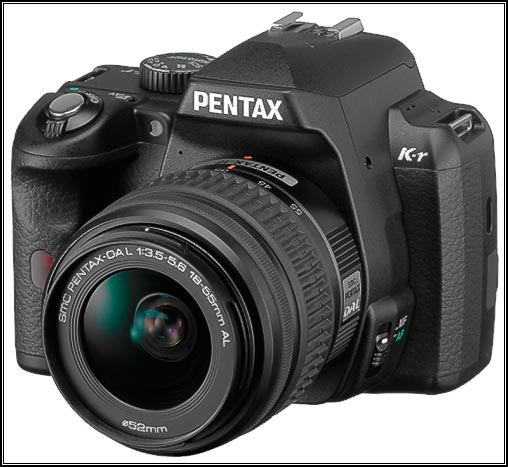 The K-r was introduced at the same time as the K-5 in 2010. The K-r offers almost as fast continuous shooting (6 fps) as the K-5 (7 fps) The K-r was the first Pentax DSLR that lets the user choose between the standard rechargeable lithium-ion battery and a set of AA-sized batteries that can be put into the camera using the D-BH109 AA-battery holder.

The K-r was available in a variety of colours, however not every colouring was available in every market. In the US, the pink, purple, blue, green, yellow, navy, metallic brown, gold, silver, black, and white versions were available, whereas in Germany the black, white, red, yellow, blue, metallic brown, pink, and purple version were sold. Sets of the black, white, red, or pink camera including the smc PENTAX-DA 1:3.5-5.6 18-55mm AL zoom lens of identical color were also offered.

In Japan it was possible to custom-order a multitude of colour combinations:
12 Body colours (black, white, pink, purple, blue, green, yellow, red, navy, metallic brown, gold, silver)
could be combined with 10 grip colours (black, white, pink, aqua, pale orange, yellow, green, blue, red, brown).
Optionally, the smc PENTAX-DA 1:2.4 35mm lens could also be ordered in any of the 12 colours that were available for the camera body

Of the limited multi-color Kurojenai Robo edition K-r only 100 pieces were sold in Japan, only. It came equipped with an appropriate multi-color version of the smc PENTAX-DA 1:2.4 35mm AL lens

Another 2011 Japan-only multi-colour edition is the Tower Records Rainbow Edition K-r, which came equipped with a DA35/2.4 lens.

Also in 2011, Pentax offered 5 special camouflage editions of the K-r. Black/white, black-olive/khaki, red/white, blue/white, and neon green/white. The colour of the packaged lens corresponds to the colouring of the camera.