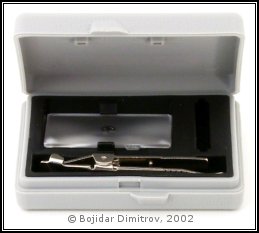 In addition to laterally reversing the image, most SLR cameras incorporate one more very important function into the viewfinder &#8212 the camera’s light meter. Apparently this is the easiest and cheapest solution, but it is not necessarily the best. Because the light meter is situated between the focusing screen and the opening for the photographer’s eye, it can be negatively affected by light entering through both. Replace the focusing screen with a "darker" one, and the camera overexposes. Take a picture without holding your eye close to the viewfinder’s opening, and the camera underexposes. Think of it this way: the light meter’s sensitivity is adjusted precisely to the mirror’s reflectivity and the screen’s brightness. When you replace the screen with one that transmits more light, the light meter receives more light than the film, and the picture is underexposed. Three possibilities exist for correcting this effect: recalibrate the light meter, adjust the film’s ISO rating to a lower EV value, or manually overexpose each exposure. If you replace the screen with a less transparent one, you must follow the reverse procedure. The one important exception to this rule is the LX, whose light meter is in the mirror box, and is not affected by variations of the screens and viewfinders.

The quality of focusing screens has improved constantly, and each new generation is finer and looks brighter. The designations of the Pentax focusing screens use two letters and normally two digits. The first letter indicates the screen’s dimensions, and distinguishes between screens with different designs, patterns, focusing aids, etc. The numbers indicate the screen age or generation. Higher numbers normally indicate more modern (and usually better) designs. Screens without numbers or with a single digit are from the first (level-10) generation.

The following sections list all Pentax cameras that support interchangeable screens and the screens that fit them.

Screens for the MX and LX

Like previously discussed, screens designed for the MX can be used in the LX without the need for adjusting the light meter. LX screens in the MX will cause a 1/3 EV underexposure, but such a small difference will be virtually unnoticeable.

Screens for all these bodies have the exact same dimensions, but 60-series screens are about 1 EV brighter than the 50-series. All screens have matte backgrounds and different markings.

There are two screens available for this body: the standard GF-60 (plain matte) and the GG-60 (matte with grid lines).