Similar to a filter, a close-up lens is screwed into the filter thread of a lens. Without light loss, it reduces the minimum focus distance of the lens and increases the magnification ratio.

The names of the Pentax close-up lenses are made up as follows:

The Pentax close-up lenses are listed in the Table 1. The ones with the larger diameters are the older versions, designed to fit the filter threads of the K-series lenses.

This set is meant to be used in combination with a ring flash and a Dental Macro lens (see the diagram). It consists of two close-up lenses (DS9 and DS25) and a magnet holder. DS9 has a yellow painted ring around it, and DS25 has a red one. Both names follow the close-up lens naming convention explained above, with the addition of “D” for “dental.”

Instead of the DS9 the M.D.Image II Set contains the T9-2x close-up lens for 2x magnification. 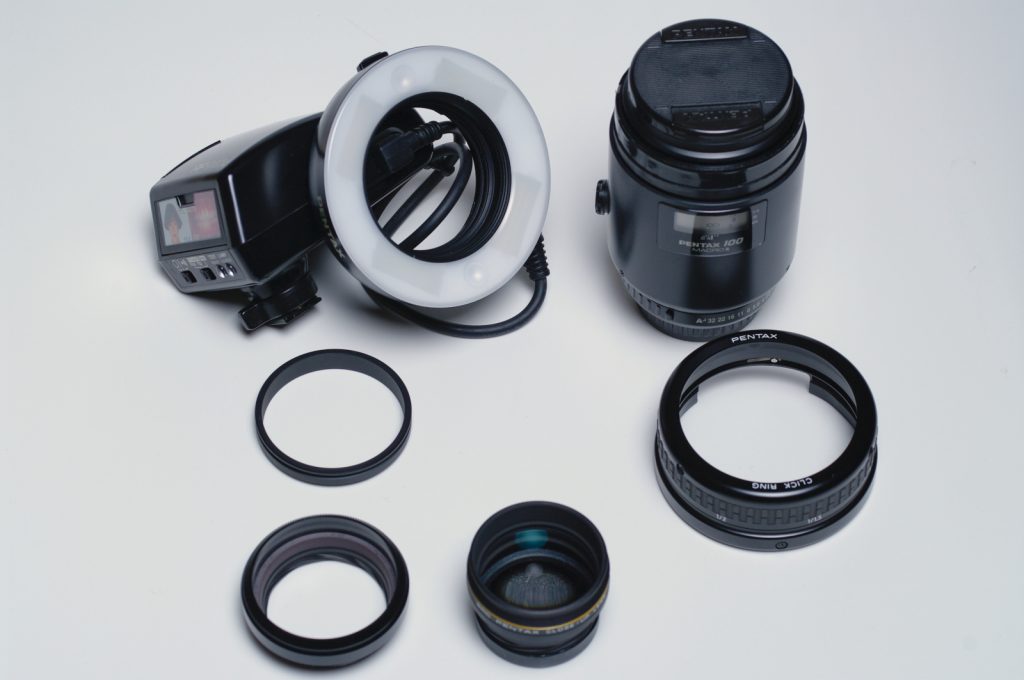 Extension tubes are mounted between the camera and the lens. They increase the distance between the two, thus allowing closer focusing and therefore a higher magnification ratio. The longer the extension, the closer the distance to the object.

The following extension tubes are available:

are used for mounting a lens backwards. One side of the adapter screws into the lens’ filter thread and the other mounts onto a camera body or an extension tube. Using such an adaptor is advised when shooting at magnifications higher than 1:1. Two reverse adaptors are available: for 49 mm and 52 mm filter threads.

facilitates attaching a ring light to the mount of a lens that itself is mounted backwards on the body.