The AF operation is as follows. The primary mirror is semi-transparent and lets 35% of the light pass through. Immediately behind it is a secondary mirror that directs all of that 35% of light down through an IR filter and onto an MOS sensor chip. This chip makes all decisions about when an image is in focus or how the lens should move to make the image come into focus.

“SAFOX” stands for Sensor Ability Fortifying Optical Compensating System. It has gone through four revisions, with SAFOX-I being used in the SF series AF bodies, and SAFOX-IV being used in the ZX/MZ bodies. All SAFOX-type lenses are fully compatible with all SAFOX bodies. Basically, this means that the SF, Z/PZ, and ZX/MZ bodies are all compatible with all F and FA lenses.

This system works as follows. The main mirror which is semi-transparent in the middle lets a fixed amount of light pass to a small auxiliary mirror at its back. This mirror redirects the light to a light sensitive CCD-sensor which makes a decision on whether the image is in focus, and then transmits an electrical signal to the auto focus chip. This chip calculates the required amount and direction of rotation of the AF motor. The “in focus” analysis is based on phase detection. The light rays which are deflected by the auxiliary mirror are passed through an infra-red filter and then through a lens system that splits the image in two. If the image is in focus, these two images match. If the lens is focused to far, the two images have a greater distance on the CCD line, if it is focused to narrow these two images have a shorter distance then in the ´zero´ position. Out of this image-, phase-shifting the computer calculates the number and direction of rotations for the auto focus motor. It is not possible to stop right now from a full speed focusing to the exact point. So the speed is reduced before the right focus point is reached. The computer of the camera subdivide the number of turns to reach the right focus point. A photo interrupter in the lens count the impulses and send it back to the camera. The camera compares the actual value with the rated value. A certain steps before the rated value is reached the speed of the auto focus motor is reduced. To the motto "Trust is good — control is better" the computer starts a control measuring.

Translated from the book ´PENTAX MZ-5´ by "Richard Hünecke" Laterna magica. Pictures are from the PENTAX company. From A Busse <abusse@wupperonline.de>

SAFOX II is the upgraded of Pentax’s original SAFOX . Light enters through the lens, bounce of the main mirror, is turned 90 degree and is led to the bottom of AF detection point. Then it goes through the Infrared- Cut Filter, Field lens and Image forming lenses to the CCD. SAFOX II’s image Forming lenses are brighter by one stop, and its CCD is twice as sensitive as conventional SAFOX’s.

In AF servo mode , when subject movement is faster than 1.5 mm/sec across the film plane, the camera operation is automatically switched to focus prediction mode . It calculates the focusing error and generates signals to control the amount of lens extension to compensate for the error create by the subject’s movement between shutter release and the start of exposure. 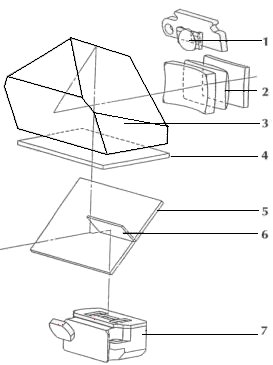 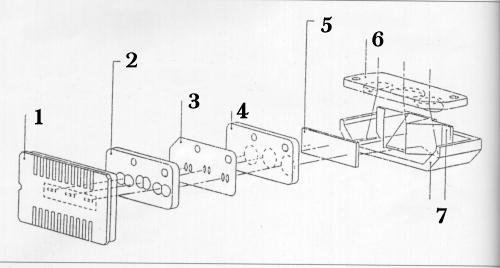